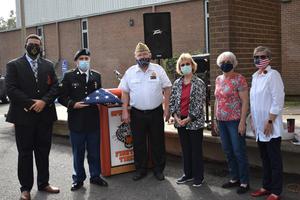 Every year Opelousas High School presents a program for our area Veterans and treats them to a brunch. In the clutch of the world pandemic, the idea of an annual program is reimagined. To this end, Mr. Mire’s Civics Club and the OHS Cheerleaders led the new program to take place in front of the school as veterans lined up in their vehicles. During the Ceremony, Jake Domingue and Michael Hammond provided a history of Armistice, now Veteran’s Day and a recognition of those of service on the OHS campus and all those who fought and continue to fight to protect the freedoms we enjoy. We also recognized the Opelousas Chapter of the Veterans of Foreign Wars and Gary Behringer, Jr. Vice-Commander District 7.

The local chapter of the Daughters of the American Revolution bestowed a very special U.S. flag upon our school. DAR member Carla Schultz presented the flag to Commander Behringer, who in turn presented to Specialist Andrew Mire, who raised the flag with members of the Civics Club: Jake Domingue, Michael Hammond, Madison Broussard, Shaina Johnson, and Lakayla Cleveland. The flag has had a unique journey to fly over Opelousas High School. Carolyn Jarrell, the DAR’s Registar/Treasurer, secured this flag through the offices of Congressman Ralph Abraham after it had flown over the U.S. Capitol on July 4, 2020. DAR Regent JoAnn Caillouet notes, it is the goal to perpetuate the memory and spirit of the men and women who achieved American independence.

After the ceremony and the raising of the new flag over OHS, the veterans were treated, in Covid style, to a drive through plated brunch prepared by the talented cooks of the OHS cafeteria staff. Inside, students watched the ceremony live stream via Google Meet in their classrooms.

Thank you to the millions of veterans across America who have laid their lives at the altar of freedom in humble servitude to liberty. Because they protect and defend, millions of people around the world now enjoy, as we enjoy, the blessings of liberty.